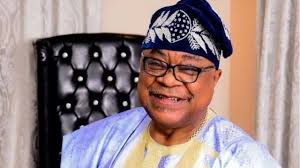 Nigerians were shocked on Wednesday upon receiving the news of the death of the erstwhile governor of Oyo state, Otunba Alao-Akala,

A source close to the family informed newsmen that the late governor was poisoned.

The source who spoke under the strict condition of anonymity said that the deceased started vomiting blood before some doctors were invited to attend to him but he couldn’t survive it, RulersWorld reports

The source further disclosed that Late Akala, upon his return from Abuja to Ogbomoso yesterday, held meetings with some people, watched a football match and went to bed. “There was no sign of any ailments on him. So we wondered what could have made him vomit blood”, said the source.

Meanwhile, another family source maintains that contrary speculation that he was poison, he said the late politician slumped in the bathroom while having his bath and could not be immediately resuscitated thereafter.

Akala was said to be planning to attend a funeral function of a close friend of his today and also held political meetings.

It was also gathered that his family had concluded arrangements to hold a special 70th birthday anniversary for his first wife, Florence, who is the mother of Olamijuwonlo former Chairman of Ogbomoso North Local Government Area.

Many dignitaries had already been invited to grace the said birthday bash which was expected to take place in Ogbomoso this Saturday 15th January 2022 before his death occurred this morning.