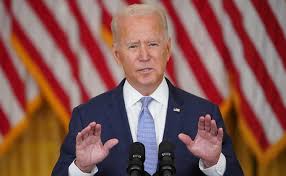 Fall of Afghanistan: I won’t order US troops against Talibans- Biden

President Joe Biden said on Monday that he made the right call to pull American troops out of Afghanistan even though he said the Taliban’s swift seizure of Kabul unfolded faster than expected.

“I stand squarely behind my decision,” Biden said during a speech at the White House.

“The truth is, this did unfold more quickly than we had anticipated,” Biden said.

Without specifying any particular mistakes that were made, Biden said the withdrawal process has been “hard and messy – and yes, far from perfect.”

But Biden emphasized he is honoring the commitment he made when he ran for president to bring the military involvement to an end.

The president interrupted a working vacation at Camp David to make his first public comments about the Taliban’s takeover of the country, a foreign policy debacle – particularly for a president who came to the office with decades of foreign policy experience.

He took no questions and quickly went back to the presidential retreat.

David Axelrod, who was a top aide in the Obama administration, said Biden made a compelling case for why the U.S. is leaving Afghanistan that will resonate with many Americans.

“He didn’t do as well taking responsibility for HOW we got out, and the obvious failure to anticipate events,” Axelrod tweeted.

Experts had warned that the Afghan military might not be able to hold on after the the U.S. left.

Taliban fighters completed their sweep of the country by seizing control of Afghanistan’s capital Sunday as American troops scrambled to evacuate thousands of U.S. diplomats and Afghans from the U.S. Embassy.

Biden said there have been “gut-wrenching” scenes in Afghanistan. He defended efforts to close the embassy and secure the airport to fly people to safety.

Addressing criticism about why the evacuation of Afghanis didn’t happen sooner, Biden said some didn’t want to leave because they were still hopeful about the outcome. He said the administration didn’t want to trigger a crisis of confidence.

He said he followed through on a troop withdrawal plan developed during the administration of President Donald Trump.

“I know my decision will be criticized,” he said.