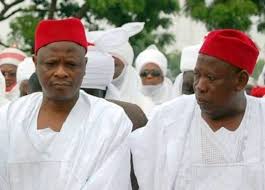 The Kano State government has accused the former governor of the state, Rabi’u Musa Kwankwaso of leaving behind a liability of N54.4 billion for the five kilometre road projects across the 44 local government areas of the state.

This was disclosed by the Commissioner for Information, Malam Muhammad Garba, while briefing reporters on the outcome of the State Executive Council (SEC) meeting at Africa House, Kano.

Garba revealed that the council has received the report of the Technical Committee to assess the five km road projects which were awarded by the Kwankwaso administration.

It was gathered that the local government road projects were awarded under the defunct Ministry of Land and Physical Planning, with the state Urban Planning and Development Authority (KNUPDA) as a supervising agency.

The Information Commissioner said five km road projects in three local government areas were revoked and re-awarded in Warawa, Ungogo and Dawakin Tofa due to non-performance.

“Some portions of the projects in Tsanyawa and Bichi along Kano-Katsina Road were released to the Federal Ministry of Works and Housing based on a request from the Federal Government.

He added that the Council has approved the release of N607.1 million for the rehabilitation of Rimin Gado-Sabon Fegi-Jilli-Gulu Road in Rimin Gado Local Government Area.

Previous: Residents of Lagos community kick against proposed impeachment of council Chairman
Next: Yari warns gov Matawalle, says he will lose his seat if he decamps to APC