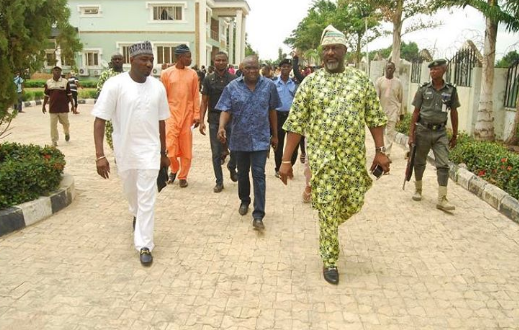 The Chairman of the All Progressives Congress (APC) in Kogi, Haddy Ametuo, says  “some ghosts “ initiated the  recall process against Dino Melaye.

Ametuo, who stated this in a statement issued in Lokoja on Sunday on the botched recall process,  expressed delight that the efforts had come to a premature end through the collective will of the people of Kogi West Senatorial District.

“Melaye , the only Senator our party has in Kogi State,  won with 94.66 per cent  leaving the remaining 5.34 per cent to the petitioners.

“The messages are very clear; that Melaye is the most popular Senator ever produced by Kogi West,” the statement said.

According to the Chairman, this is a sign of what to expect in the 2019 general elections.

“No amount of financial inducement and coercion will change the will of the people of Kogi State in future elections,’’  he said.

The APC Chairman commended the high level of neutrality and transparency displayed by the Independent National Electoral Commission (INEC ) and other stakeholders throughout the exercise.

“It gives us high optimism that future elections will be very free and fair. INEC therefore deserves commendations for the job well done,” he said.

He insisted that the APC still remains the most viable alternative for good governance in the state.

“I call on all members of our party to conduct themselves in  a manner  that will boost the image of our great party and not things that will further cause disrepute in our party,” he said.

Previous: Buhari is healthy, he would find his campaign much easier in 2019, says Minister
Next: INEC denies spending N1bn on Melaye’s recall