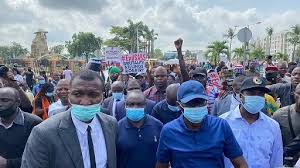 Gboyega Akosile, the Chief Press Secretary to the Governor of Lagos State, has debunked the viral video, saying that Governor Babajide Sanwo-Olu was booted at the Teslim Balogun Stadium, Surulere as fake.

Recall that the 23 seconds video, which a Twitter user, @absuxxess, shared, showed some cars leaving the premises of the Teslim Balogun Stadium after the Super Eagles’ match with Lesotho in an African Cup of Nations, AFCON, qualifier tie on Tuesday evening.

Reports went viral that sone Some youths at the Stadium gate booed the occupants of the cars with a chant of ‘Ole,’ which means ‘thief’ in the Yoruba language.

Reacting to the development,  Akosile, in a tweet, insisted that it was not Sanwo-Olu’s convoy.

Akosile wrote, “This is wrong, totally false. This is not Governor @jidesanwoolu’s convoy. Let’s stay away from spreading falsehoods. I’d implore you to correct your wrongful publication.”

Previous: 2023 Presidency: Why we are mounting pressure on Yahaya Bello to contest- Group
Next: No going back on June deadline for completion of our assignment- APC scribe