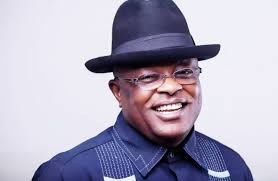 The Ebonyi state chapter of the Peoples Democratic Party (PDP), has raised alarm that Governor Dave Umahi is threating the lives of some of its key members in the state.

The Publicity Secretary of the chapter, Silas Onu, made this allegation at a media briefing in Abuja on yesterday.

Acccording to him, the Governor has been intimidating the chieftains of the opposition party after his Defection to APC.

He raised another weighty allegation, accusing  Umahi of stockpiling arms in the state, to attack opposition elements through his agents.

Silas Onu said: “The Federal Government and the international community are called upon to pay a closer attention to the developing rate of intolerance in Ebonyi State and call the Governor to order immediately before things get out of hand.

“The PDP is not interested in violence even as we engage in our political activities and will not be deterred by open acts of intimidation, violence and threat of it by the government or its official and unofficial agents.

“The British High Commission, Canadian High Commissioner and the Ambassador of the United States of America are called upon to take a special interest in Ebonyi State as the government have continually resorted to uncivilized methods for political engagements.

“Our petitions will be sent to all High Commissions and Embassies to draw attention towards this inhumane leadership style that cares less about human lives.

“His Excellency, President Muhammadu Buhari is also called upon to impress it on the Governor to lead in the interest of all as the chief security officer of the state.

“No one is concerned or threatened by the political identity of the Governor, but his desire to paint a picture of overwhelming love and support in Ebonyi State is driving him into despondency and hatred towards those who disagree with him.

“We want peace and will work to achieve it. However, the decision to maintain peace and security at all times is in the hands of the Government and the Governor must discharge this duty responsibly.”

Previous: Secondus to Buhari: You have admitted your failure, resign now
Next: I am not quarrelling with gov Oyetola- Aregbesola