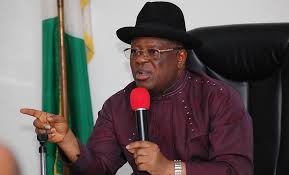 The Governor of Ebonyi State, David Umahi has threatened to arrest any stakeholder that would conduct a parallel Ward Congress, the All Progressive Congress, APC, holds the exercise today, Saturday.

According to him, he would send  to prison any stakeholder that caused a crisis or breached peace in the state,

Umahi issued this warning  while addressing party leaders/stakeholders of the state during the emergency APC meeting that took place at the ecumenical centre, Abakaliki, capital of Ebonyi state.

It was learnt that some party leaders in Ikwo, Ishielu, Ezza north, Ohaukwu, Ebonyi, Ohaozara and Ivo local government areas disagreed on consensus and called for Umahi’s intervention.

According to the governor, “Mobilization even when there is consensus is very important, if the people were not satisfied with the mobilization we cancel it, because we want the world to know that this is the home of APC.

“If you have done your consensus and there is no mobilization to justify that, we will assume you did the election in your backyard, because we have the party register and let me warn that what you enter must not go beyond the party registration.

“Let me welcome the seven-man Congress committee to Ebonyi state, first is to comment on the issue of our contentious National chairman, I want you to listen to this very well, I’m not a lawyer but this Constitution of the party is meant for all of us, and if you went to school you will be able to read and understand. Because if the Constitution of the party is meant for the lawyers, it should have been on a limited number.

“Another section I just saw now in article 18 said, “where the national committee has set up a standing or ad-hoc committee(s) and has assumed jurisdiction on any issue, no organ of the party shall deliberate upon or set up a similar or parallel committee, which means that nobody conducts parallel Congress in Ebonyi state.

“If you see anybody conducting parallel Congress in Ebonyi state, my directive is that security agencies should arrest anybody that is there and Ebubeagu should also do the same.

“It’s important that we noted this very well, I have done everything as a leader to ensure everybody is carried along well, unfortunately we still have over two third (2/3) of the forms that are still awaiting people to purchase them.

“Some people who do not believe in my leadership have gone to Abuja to purchase their forms, no problem, but they must comport themselves with the 7-man committee. If they do anything outside that, there will be consequences for that.

“If you want to do parallel Congress you have to go to Enugu or Akwa Ibom or any other place to do it. Because there will be a fight if they try it and don’t say I did not warn you. The screening has to continue till late in the night, we want to ensure that everybody who wants to be screened should be screened,” he stated

Previous: APC Ward Congress: Erring party members will be dealt with- Buni warns
Next: Saharareporters lied, Tinubu not hospitalised in US- Spokesman