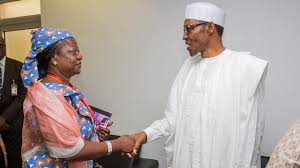 According to the group, the upper legislative chamber  has preserved the integrity of the electoral umpire.

The group however called on  the Civil Society Organisations (CSOs) and Nigerians to still be vigilant on the Electoral Bill.

It lent its voice in a statement by its Executive Director, Faith Nwadishi, said Onochie was rightly seen by Nigerians as partisan and toxic.

The statement said: “The Senate’s rejection of the nomination of Madam Lauretta Onochie as a National Commissioner for the Independent National Electoral Commission (INEC) is a welcome development and augurs well for our democracy.

” Recall that the nomination of Lauretta Onochie by President Mohammadu Buhari as INEC National Commissioner to represent the South-South in October last year was greeted with outrage, disappointment and roundly rejected by the majority of Nigerians.

“The Centre for Transparency Advocacy issued a statement in support of other CSOs and majority of Nigerians in rejecting her nomination.

“Madam Lauretta Onochie was rightly seen by Nigerians as partisan, toxic and lacked the integrity to assume such office as a National Commissioner and a policymaker in a sacred office like the Independent National Electoral Commission.

“The Senate has done the needful by listening to the voice of the people even though pressured by Nigerians to be accountable to the people and represent the interest of the people.

“CTA calls on CSOs and Nigerians to still be vigilant and look forward to the National Assembly passing an Electoral Bill that will have electronic transmission of results by INEC and addresses all other issues raised by Nigerians. Citizen’s power keeps hope alive for our democracy.”