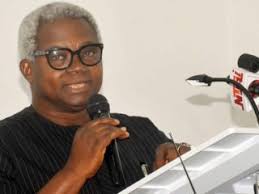 One of the top chieftains of the ruling All Progressives Congress (APC), Osita Okechukwu has lambasted the Peoples Democratic Party(PDP) for attacking the continuity agenda of President Muhammadu Buhari,

Acccording to him, the major opposition party greatly benefitted from the agenda.

Okechukwu, the Director-Generalal of Voice of Nigeria (VON) was  reacting to PDP criticism of President Buhari’s promise of ensuring continuity of his programmes and policies on eturning from medical treatment

In a statement titled “PDP principal beneficiary of President Buhari’s continuity, the VON boss noted the opposition’s action was “unconscionable and height of ingratitude”.

He said: “For us Buharists, we must candidly agree that some unforced errors were made; however our continuity trademarks in many spheres of public affairs are unbeatable.

“And PDP is the main beneficiary. To turn round now to clean mouth and condemn Mr President is unconscionable and height of ingratitude.

“Banditry, Herdsmen/Farmers clashes, kidnapping and insurgency will sooner than later not only abate but vanish.”

Explaining how PDP benefited from the trademark the VON boss recalled how in 2015 over 1,000 Board appointments which tenure were not concluded were retained unlike the mass dissolution of boards in 1999 by PDP .

Okechukwu recalled that “opinion was divided, some of us canvased that Mr President should dissolve all the Boards to make room for APC members and supporters and Buhari said an emphatic no. These PDP Board appointees were not only beneficiaries but more or less adulterated our transparency manifesto.

“Point two, all the federal contracts, most remarkable is over 1,000 federal roads. In this instance once more opinion was divided some argued that the contracts should be revoked and awarded fresh as contracts, Mr President said emphatic no.

“In 1999, PDP revoked nearly all Petroleum Trust Fund ongoing contracts and made a bazaar of the exercise. One of the casualties was Enugu Urban Water Scheme, which was callously awarded to Chinese instead of Strabag of Germany which designed the project. It failed and today scarcity of water in Enugu is the outcome.

“PDP became the beneficiary when Mr President started paying the contractors some of whom their monies were embezzled by the PDP in what turned out to be dubbed the locust years, when oil sold above $100 per barrel.

“Point three, was the much mangled and manipulated Privatisation program where State-Owned Enterprises were auctioned off. Even Ministerial and Legislative quarters were sold. In this instance, opinion was once divided and Mr President maintained his continuity standard.”

He  also noted that the accounting process of the PDP Privatisation programme was less than transparent.