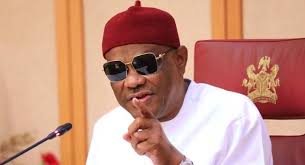 I will never campaign for Atiku- Wike insists

Governor Nyesom Wike has that ongoing campaigns in the state for candidates of the Peoples Democratic Party (PDP) precludes the presidential candidate of the opposition party, Alhaji Atiku Abubakar.

According to him, members of the Rivers State PDP Campaign Council will not campaign for Atiku because there was no understanding to warrant such support in the oil-rich state.

The governor, who is the arrow-head of the Group of Five (G-5) governors, said that anybody, who said Rivers was inconsequential, would suffer repercussion for ignoring the state.

The governor enjoined all residents in the state to be rest assured that no intimidation and propaganda could cause a distraction from the political path that had been so chosen.

He said: “Any person who says Rivers State is not important, we will pepper him. Anybody who says he doesn’t regard Rivers State, we would not regard such person.

“No State can point at us to determine what will happen here. Nobody can do such. So, be bold to say, I’m from Rivers State, I live in Rivers and I am happy with Rivers. What is important is our state, which we have collected.”

Wike said the state All Progressives Congress (APC) should not bother to campaign in Rivers because of the recognition given to his administration by President Muhammadu Buhari, as the best in infrastructural delivery in the country.

He said because his administration believed in practical demonstration of governance, 12 flyovers were executed within four years, in addition to other development projects.

Wike said: “All these people who say they are campaigning, what are they campaigning for? President Muhammadu Buhari, the leader of APC said I am the best as far as development is concerned. What nature of campaign will they be doing again?”

Previous: Why Atiku and Tinubu should step down for Obi now- LP chieftain
Next: Tinubu’s poor health will affect him if he wins- Najaatu Muhammad