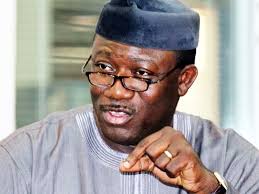 INEC should be allowed to handle electronic transmission of results- Fayemi

The Governor of Ekiti,  Kayode Fayemi State has broken silence on the issue relating to electoral transmission of results ahead of the 2023 general elections.

According to him, the Independent National Electoral Commission (INEC) should determine when to use the electoral transmission of results

Fayemi spoke on Channels Television’s NewsNight, which a on Monday.

He said, “Personally, I feel we should leave the Independent National Electoral Commission (INEC) to handle and decide when or where to utilise the electronic transmission, not the principle of it.”

Fayemi added, “I feel that the hullabaloo around this could have been avoided partly because I feel it is something that we must not over-regulate, particularly the activities of an independent commission.

Recall that the National Assembly had on July 15 passed the bill moments after the PDP lawmakers walked out of the heated session.

Previous: Ebonyi 2023: There will be no fighting about who will succeed me- Umahi
Next: Buhari-led APC govt will have completely destroyed Nigeria by 2023- NEF