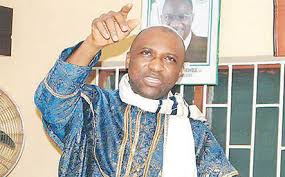 The Leader Of INRI Evangelical Spiritual Church, Primate Elijah Ayodele, on Tuesday said God is angry with Nigeria due to the injustice in the judiciary system.

Primate Ayodele, who blamed the judiciary system for some of the wrongs currently experienced in Nigeria, said the country may never get the right leaders.

He said Nigeria would continue to deteriorate due to the alleged injustice by the judiciary.

The clergyman said the judiciary system has given power to the wrong people because Nigeria has adopted the politics of money.

In a statement by his Media Office, the clergyman explained that Nigeria is experiencing hard times due to injustice across the nation.

Citing examples, Primate Ayodele referred to the Imo State Supreme Court judgment that made Hope Uzodinma governor of the state despite coming fourth in the election.

Furthermore, he urged Nigerians and the judiciary to desist from engaging in politics of money if the country must move forward.

He said: “Unless we stop the politics of money in Nigeria, the country will continue to deteriorate because the wrong people have been given power. The judiciary has played a huge role in giving power to the wrong people even when they know it but the love of money has made injustice surround the country.

“Due to the injustice in the land, things happening in Nigeria at the moment are expected because God isn’t always happy with such nations. In Nigeria, if we don’t stop the politics of money, we will not get the right leaders who will take us seriously, Nigeria will continue to deteriorate.

“For example, Imo state is a case study for the corrupt practices in the judiciary system. The current governor, Hope Uzodinma came fourth in the governorship election but because of the politics of money, the judiciary system found a way to declare him winner of the election, we all can see how Imo state has become ungovernable for the governor as a result of insurgents, killings, attacks and other social vices”

“In Imo north senatorial district, the judiciary system declared Frank Ibezim as the winner of the bye election that took place in December 2020 whereas, it has been confirmed that he has discrepancies in his certificate. The ruling party had no candidate for the election and the candidate of the PDP, Emmanuel Okewulonu should be declared winner but the judiciary failed because of the politics of money”

“Nigerians and the judiciary system need to desist from this act of politics of money if we want the country to move forward or else, we will keep experiencing hardship.”

Previous: 2023: Why Nigerian youths should get their PVCs- YPP Chief
Next: APC Governors ask Buni to continue to pilot affairs of the ruling party