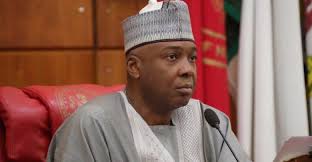 At as at the time of filing this report, the former Governor of Kwara State iis in the custody over allegations of theft and money laundering.

According to sources, the situation tmay trigger another episode of troubles for the politician.

While he was the country’s number three man, Mr Saraki spent much time facing allegations of corruption and false declaration of assets.

The allegation against him borders  on heft and laundering of public funds using a network of cronies and proxy companies.

His suspected baccomplices who aexecuted contracts for Kwara State under Mr Saraki, allegedly made returns, for many years, to the former governor,

Previous: Saharareporters lied, Tinubu not hospitalised in US- Spokesman
Next: EFCC didn’t arrest me, I went to honour their invitation- Saraki