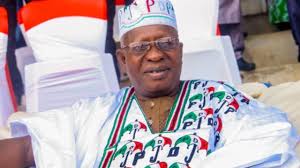 Just in: PDP confirms Akinwonmi as its Acting National Chairman

Kola Ologbondiyan, PDP Spokesman confirmed the development to Journalists during a statement on Thursday.

The spokesman confirmed the reschedule of the party’s National Executive Council (NEC) for Saturday.

“We will be holding our caucus and another NWC meeting tomorrow preparatory to holding our National Executive Council meeting at 12 ‘O’clock on Saturday.”