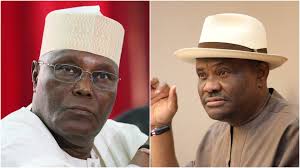 Just in: Wike and allies pull out of Atiku’s campaign

It was gathered that the team arrived at this decision after having a crucial meeting in Port Harcourt early morning on Wednesday,

It was learnt that the group has  vowed not to partake in Atiku’s campaign activities pending the resignation of the party’s National Chairman, Iyorchia Ayu.