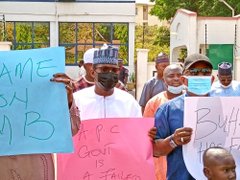 The abduction of the Kankara school boys is taking more of political dimension as some top stalwarts of the opposition party,  the Peoples Democratic Party have started protesting.

On Thursday National working Committee of PDP led by its Chairman, Uche Secondus  led a peaceful  protest demanding the rescue of the abducted students of Government Science Secondary School, Kankara in Katsina State.

The protest which attracted some mother  is tagged #BringBackOurBoys was held at the PDP liaison office in Maitama.

The mothers, amid tears lamented the deteriorating security in Nigeria, calling on President Mohammadu Buhari to take urgent steps and released the school boys.