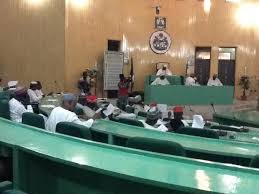 The Speaker of the Kano State House of Assembly, Abdulaziz Garba Gafasa and the House Majority Leader, Kabiru Hassan Dashi suddenly resigned their positions on Tuesday.

The information was released to the public by a Member representing Doguwa, Salisu Ibrahim Riruwai, without giving any pecific reason has been given for their actions.

It was gathered that the resignation letters of the duo were received at 1:08am Tuesday by the Kano Assembly.

“The speaker resigned on his own personal reason, according to his resignation letter sent to the 9th Assembly platform at 1:08am, while the majority leader did not give reason for his resignation,” Ibrahim said.

It was gathered that new  speaker and a majority leader will emerge today.