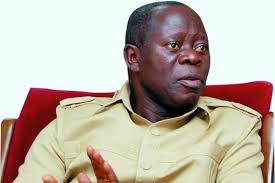 Keyamo to Oshiomohle: I didn’t destroy your political career

Festus Keyamo, Minister of State for Labour and Employment, says that he was not involved in the political misfortune of Adams Oshiomhole, former National Chairman of the All Progressives Congress, APC.

He sais that he was not part of the forces that  “consumed” Oshiomhole during the last governorship election in Edo State.

According to him, former governor is still suffering from the political disappointment he suffered during the election.

Recall that the former Governor of Edo, through his aide, Victor Oshioke, had denied claims of plotting to return as APC’s National Chairman.

Reacting, , Keyamo, in a statement by his aide, Tunde Moshood, rubbished claims made by the former APC National Chairman.

The statement reads partly: “The story of the political tussle between Gov. Godwin Obaseki and Comrade Adams Oshiomhole in Edo State is so well documented that we do not need to remind Nigerians about it. Mr Keyamo had ABSOLUTELY NOTHING to do with it.

“When the crises finally consumed Oshiomhole, Mr Keyamo was not in any strategic legal position like the office of the AGF, APC legal adviser or an SA to any high office within the system on legal matters. Mr Keyamo is not PRIVY to how members of the CECPC were nominated and/or selected, so he did not have the benefit of the opportunity to point out any legal disabilities. Regrettably, the respected Comrade must have given in to gossip and rumours.

“For the avoidance of doubt, Mr Keyamo has no personal interest to serve. He is very content with the assignment given to him by Mr President and is very much ready and willing to return to his striving legal practice whenever his assignment is over.

“Keyamo is not struggling with anyone for anything other than to enthrone justice and fairness within the system. The minister has climbed the highest ladder in his chosen profession before being called upon to public office. Public office is not a do-or-die affair for him. All insinuations in Oshiomhole’s release that Mr Keyamo is after some PERSONAL gain is pure