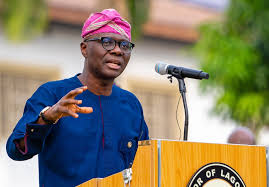 The All Progressives Congress (APC) says the victory of All Progressive Congress in the Saturday’s by-Election in Lagos shows the popularity of Governor Babajide Sanwo-Olu among the residents of Lagos State.

Acccording to the party, the Governor has perfectly keyed into his THEMES agenda he promised during electioneering campaign.

Publicity Secretary Seye Oladejo said that one of the good attributes of the Sanwo-Olu’s govt is that he has also not abandoned the projects inherited from his predecessor.

He added that Lagos voters decided to choose Sanwo-Olu because of his landmark achievements.

Oladejo said: “The commitment to complete inherited projects has been upheld in the successful completion of the Murtala Mohammed International Airport road and the near completion of the Agege Pen Cinema flyover.

“The inauguration of 37 newly constructed roads and 500 others rehabilitated by the Public Works Bureau are also noteworthy.

“The procurement of eight boats for water transportation and the recruitment, training and deployment of 1,000 officers were geared towards the improvement of public transportation.

“The commitment to construct the 4th mainland bridge, which is making remarkable progress with the shortlisting of eight of the 30 firms that expressed interest, will be the legacy project of the current administration. As characteristic of the Sanwo-Olu government, the community engagement to seek support and cooperation has begun in earnest.

“The interventions by the government in the health sector by providing diverse free treatment for thousands of beneficiaries and free surgeries in paediatrics, eyes, orthopaedic, nose and dental ailments were most impactful.

“The construction of the mother and child hospitals at Igando and Eti-Osa also boosted the health sector.

“Undoubtedly, our environment has improved as a result of the re-organisation of the Lagos State Waste Management Agency and the operations of the Private Sector Participation in waste management. The Olusosun landfill site was expanded to 42-acre for ease of waste disposal.”