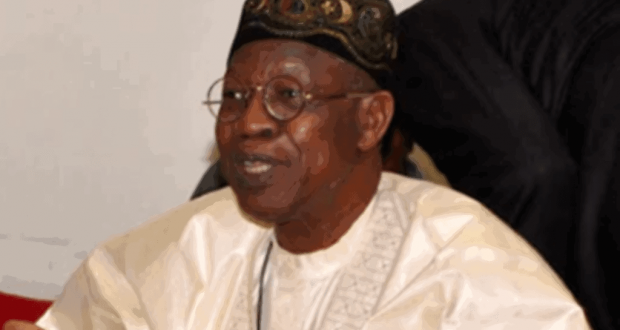 Lai to NEF: Buhari won’t resign, he will complete his tenure

The spokesman of the Government of President Mohammadu Buhari who is the  Minister of Information and Culture, Lai Mohammed has kicked against the calls for Buhari to resign.

Reacting to the calls; Mohammed downplayed it as irresponsible and cheap.

Hh added that nothing will stop his principal from completing his tenure.

It will be recalled that a pro-North called  Northern Elders Forum, NEF, had asked the President to resign due to rising insecurity in the land..

Speaking during a meeting with members of the Newspaper Proprietors Association of Nigeria, NPAN, in Lagos, Mohammed said the northern group is just playing dirty politics.

According to Mohammed: “In the wake of the killing, there have been calls in some quarters for Mr. President to resign. Well, let me say here that this call amounts to playing dirty politics with the issue of security, and it is cheap and irresponsible.

“Now, let’s put things in context. Before Mr. President assumed office, Boko Haram could stroll into any city, especially in the north, to carry out deadly attacks. Abuja, the nation’s capital, Kano, Maiduguri, Jos, Damaturu, etc were regularly targeted. Motor parks, churches, mosques, shopping complexes were not spared. Today, that is a thing of the past. Suicide bombers used to have a field day detonating their bombs and killing innocent people.

“Therefore, calling on the President to resign every time there is a setback in the war on terror is a needless distraction and cheap politicking. Let’s stop playing politics with the issue of security.