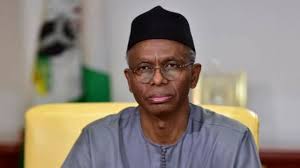 After the Kaduna State chapter of All Progressives Congress (APC) conducted a screening examination for those aspiring for Local Government elective posts, about 500 widows have stormed the party secretariat to protest the disqualification of their preferred candidate.

In a chat with newsmen,  the leader of the protesting widows, Lami Danladi, said the disqualification of Ekene Abubakar Adams as candidate for Chairman of Chikun Local Government Area was an embarrassment saying ‘Ekene is our Messiah and Breadwinner.’

They  carried placards bearing inscriptions such as, “Ekene is our choice, “It is Ekene we want, “El-Rufai, please, listen to the cry of the widows”.

‘As you can see, all of us are in black attire. We are all widows and as it is written in the two books of Islam and Christianity, God always listens to the cry of the widows,’ Danladi said.

‘We, the widows, are many in number, we are up to 500 in number, but all of us cannot make it to this protest venue because we tasked ourselves financially to transport ourselves, but the rest are with us in spirit. We were short of vehicles. We are from different wards in Chikun Local Government.

‘We have children and dependants, and it is Ekene Abubakar Adams, the APC aspirant for Chikun Local Government Area, that has been carrying our burdens and caring for us widows. He is the hope of the masses. He is a man with great passion. He is a man that touched the lives of the widows.

‘It is Honourable Ekene that is feeding us, the widows in Chikun Local Government. He empowered women and widows with grinding machines which they use to make profit on daily basis.

‘He, Ekene, picked some orphans in the community and is sponsoring their education. He also empowered the youths with motorcycles for commercial transportation, from which they are making profits to feed themselves on a daily basis.

‘We know many people whose hospital bills Ekene has paid. There are also some people that he gave cash to set up business.

‘We are not happy that Ekene, who is impacting positively on the lives of the people and wiping the tears of the widows, has been disqualified from contesting the Chairmanship of Chikun Local Government.

‘We are here to appeal to Governor Nasir El-Rufai, the man of fairness and justice, to reconsider Ekene for the election. He is like a father to Ekene. The governor is a workaholic, so also is Ekene. The governor needs to work with Ekene to move the local government forward.

‘We are in black attire because we are not happy that our choice aspirant for the Chairmanship position has been dropped. But Governor El-Rufai should listen to our cry and return the man that our hearts are after. We know that you are a governor that listens to the pains of the masses.

‘We are appealing to gGovernor El-Rufai to release our candidate to contest. We are widows, listen to our cry.

‘This is democracy, the leader we want is Ekene Abubakar Adams. Democracy is government of the people, by the people, and for the people.

‘The governor should look into the work of the screening committee and allow Ekene to contest. He is the only leader we want because he cares for the widows. He is the choice of the people.

‘We are all human beings, and if the governor refuses to hearken to our cry, may it be so because nobody can fight government. We will not withdraw our membership from APC. We are for APC and we will remain in the party.’