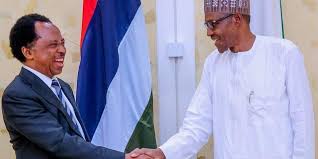 It will be recalled that the former Senator died in a private hospital in Abuja at about 2 am on Tuesday.

Mantu died after falling  been ill for nine days.

Reacting to the news, Buhari, through his spokesman, Femi Adesina, commiserated with leaders and members of the National Assembly, friends and political associates of the former Senate leader.

Buhari said that Mantu gave to the service of his people and his legacy of reconciliation and promotion of peaceful co-existence will always be remembered.

He added that Mantu brought more harmony in his state and the country at large.

Reacting, Sani tweeted, “The Government eulogised Late Senator Mantu as a bridge builder and a peacemaker.

“When he was alive, they couldn’t invite him to build the bridge and make the peace in his part of the country torn apart by ethno-religious crisis. We ignore good people alive and praise their corpse