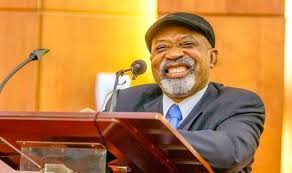 The Minister of State for Labour, Employment and Productivity, Chris Nwabueze Ngige has announced his withdraws from the 2023 presidential race.

The announcement is  coming less than three weeks after his declaration at Alor, his town in Anambra State.

In a statement released on Fridays in Abuja on Friday, Ngige said his earlier declaration, was as a result of pressures from friends, supporters and allies, given that he has the qualifications to succeed President Muhammadu Buhari.

According to him, his supporters had purchased the nomination form for him, which he was, however, yet to fill and submit.

His statement said: “On Tuesday, 19th April 2022, I publicly declared my interest to contest for the office of the President of the Federal Republic of Nigeria, following the constitutional provision that precludes our amiable incumbent President, Muhammadu Buhari from seeking re-election to the office, as he would have completed his two terms in office by 29thMay 2023.

“The declaration was made in my hometown, Alor, Idemili South Local Government Area of Anambra State.

“My declaration was sequel to pressure on me from my constituents, political associates, friends and other well-meaning Nigerians, who felt I possessed the necessary qualifications and experience for the job.”

The Minister noted that his political fans contributed money to purchase the expression of interest and nomination form of the ruling All Progressives Congress (APC).

He added that he had an audience with President Muhammadu Buhari over the development after he earlier met him on his political ambition.

“Having also consulted widely with my family, constituents, supporters and well-wishers, it is my pleasure to announce the withdrawal of my interest and earlier decision to contest the office of the President in the 2023 general elections.”