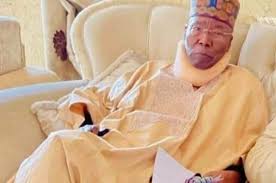 He retired as a Deputy Inspector General of Police (DIG) in charge of Operations before he joined politics.

Aliyu reportedly died yesterday in Kaduna after an undisclosed illness.

The Niger State government described him as a great man of courage who was dedicated to the country and the state.

The government received the news about Aliyu’s death during its weekly State Executive Council (Exco) meeting.

This prompted Governor Abubakar Sani Bello to suspend the meeting to enable his administration send a delegation to Kaduna State for the burial.

A statement by the Secretary to the Niger Stage Government (SSG), Alhaji Ahmed Ibrahim Matane, said the state has lost a man of inestimable value.

“The patriotic tendencies and excellent handling of legislative duties concerning the welfare of people and the nation demonstrated by late Senator Nuhu Aliyu are worthy of emulations,” the statement

Previous: Ondo Election: Eyitayo Jegede sheds more light on poll
Next: Atiku to Secondus: I am not responsible for your predicaments