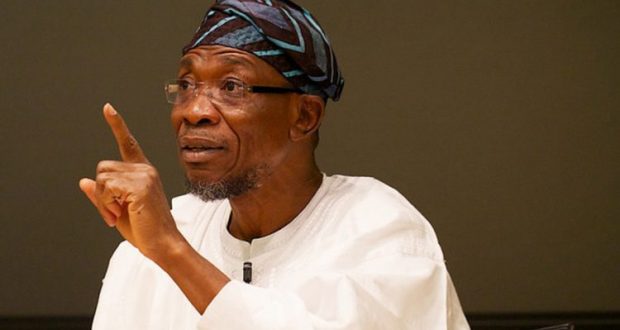 “Nobody can stop me from visiting Osun,”- Aregbesola replies PDP

The Interior Minister, Ogbeni Rauf Aregbesola has derided the Peoples Democratic Party (PDP) for warning him not to visit Osun state to avert political uproar.

Recall that the major opposition had warned the former Governor against visiting the state following the alleged cold war between him and his successor, Gboyega Oyetola.

PDP through a national media aide Prince Diran Odeyemi urged the Minister to stay away from the state as his presence may lead to political uproar which may lead to a breakdown of law and order.

Reacting to PDP statement, Aregbesola through his aide Dipo Okeyomi said the warning is coming from a sinking political party, noting that nothing can stop the former Governor from visiting the state.

He said this in an interview with ThisDay.

He said: “They are still to recover from what I will call ‘COVID-18’, which is their loss in the Osun 2018 governorship election, at a time they had done all the dress rehearsal to occupy the Okefia Government House.”

Okeyomi said  there is no war between Aregbesola and Oyetola, saying that the relationship off the duo is cordial.

“Insinuations of disaffection between Ogbeni (Aregbesola) and Governor Oyetola is the figment of imagination of the PDP.

“The two of them speak regularly and are in fact, planning this anniversary together. As a security consultant to the honorable minister, and a friend to His Excellency, the state governor, what I am telling you is authentic,” he said.

“Aregbesola is like a lion and which animal, for God’s sake, can bar the lion from playing in the wood?”, he asked rhetorically.

“It is on record that Aregbe has never for once been invited to answer to corrupt charges by the EFCC (Economic and Financial Crimes Commission) or any other anti-graft agency in the land.

“Rather, he keeps receiving praises from Nigerians, for transforming Osun State to a ‘small London’, away from the infrastructural decay that dotted the PDP era in the state.