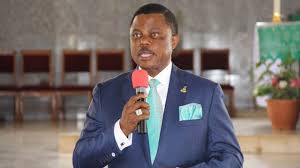 Obiano should explain why he left Nigeria hurriedly- APC

The  ruling All Progressives Congress (APC) has lashed out at Anambra State Governor, Chief Willie Obiano, for leaving the country without handing power to his deputy.

The ruling party lamented the situation during a press release by the state media and publicity secretary, Mr. Okelo Madukife

The party said Anambra people only got to know that their governor was abroad, when he was put on the watchlist list of the Economic And Financial Crimes Commission (EFCC).

“The burning question is: Does it have to take the issues arising from EFCC for Anambra State to know that their governor is abroad?

“Is it so difficult after seven years and eight months to understand that Anambra State is entitled to know when Governor Obiano is leaving the state, and for what purpose, let alone when he is leaving the country?

“Why can’t Gov. Obiano and his government learn from President Muhammadu Buhari on this count?”

According to APC, besides being abroad, the state ought to have been told if it was a holiday, a working visit etc., and the duration of his stay. He said the governor should have also addressed the question of who will be in charge of the state in his absence.

Madukife said: “The governor is hereby reminded that subject to the specifics of this closet gubernatorial trip, which cloudiness may have prompted the EFCC open statement, the governor ought to notify Anambra State House of Assembly, so that Dr. Nkem Okeke the Deputy Governor will act as governor until he is back.

“Our own checks indicate that the governor stealthily left the shores of Nigeria on on November 10, 2021.”

Previous: 2023 Presidency: Tinubu visited me because of his ambition- Yakassai
Next: Why I will remain neutral in Kwara APC crisis- Saliu Mustapha