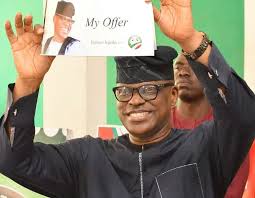 Ondo Guber: My petition has merit, I will send Akeredolu parking- Jegede

The candidate of the Peoples Democratic Party, PDP, in the last governorship election in Ondo State, Eyitayo Jegede, on Tuesday, said that he is upbeat that he would become the governor of the state.

According to Jegede, his petition before the election tribunal currently sitting in the state were enough to send APC packing from the state.

In a publication by Daily Post, Jegede stated this on Tuesday in Akure, the state capital, during the inauguration of the newly-reconstructed Secretariat of the PDP in the state.

The secretariat was two months ago razed by hoodlums during the End SARS protests with the secretariat rebuilt within eight weeks single-handedly by a former governorship aspirant of the party, Godday Erewa.

Jegede, who lost the October 10, 2020 Governorship Election to Governor Oluwarotimi Akeredolu, claimed that the APC was already jittery of losing in the court.

“The APC in the state is jittery and we shall take over soon” Jegede said.

During the inauguration of the secretariat, the State Chairman of the party, Fatai Adams, who admonished members across board to be committed and be loyal to the party, disclosed that contributions of members to the party would henceforth be used to gauge the benefits for members.

“This is the first time in the history of politics in Nigeria that a single individual, would build a secretariat of a party.

“Whenever there is anything to be shared or appointments to be made, contributions of would-be beneficiaries, would be put into consideration

Previous: Imo APC factional Chairman dares national leadership on dissolution
Next: APC Governors have failed, they are not performing- Wike