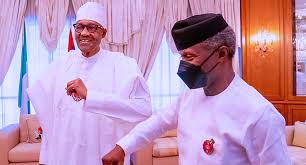 Osinbajo: Why I am the most fortunate Vice President ever

According to him, this is so as a result of his  excellent working relationship with his principal, President Muhammadu Buhari.

The second citizen made this statement  as a special guest of honour during a book launch authored by the governor of Kano state, Umar Ganduje in Abuja.

“The truth is that the deputy or vice must be up to the task everyday. He must be the most hardworking in the government, bringing his own skills and talents in representing his principal as efficiently and as effectively as possible every single day.

“Unlike the deputy governors, the Vice President has a few more well-defined constitutional roles. Chairing the National Economic Council monthly meeting, National Council on Privatisation, and deputy to several other official bodies.

“The effectiveness of the Vice President depends a great deal on the trust reposed on him by the President. It is also a function of loyalty which goes both ways. I think personally, I have been more fortunate than others in my relationship with my principal, President Buhari. I believe he also genuinely believes in the world of the Vice President.

“When he was leaving on medical leave, the first and second time, he said to me when I told him that I was going to send to him after things I scanned to send to him, but he said, I don’t want you to send to me anything at all. It is your job now just make sure you do a good job. The President does not expect that I will call him at all when he is away.

“He expect that I know what to do and I should go ahead to do it. Indeed, once I have called him while he was away, he said to me, Professor or VP, depending on how he feels, he uses Professor when he wants to pull my legs, I am away on leave, you are supposed to do your job, leave me out of this, do whatever you want to do and when I come back we talk about it. I think that is ideal and I recommend that to others,” he said.

Speaking further, Osinbajo said: “No one has the experience of deputising in Nigeria more than Ganduje. He is also one of the most experienced politician and public servant in the Nigeria, having been in the corridors of politics since 1979. He is one of the most educated man in politics with a PhD and a lecturer.

“The book is not just about Ganduje and his achievements, but more about a textbook on governance and politics. He is probably one of the richest, most celebral and humorous politician that you could ever find. I always found his views incredibly witty and perceptive. And I thought it is most interesting to have some of those his thoughts in writing.

“f you are looking for a witty and celebral analysis of a subject he should be the man.
“Many believed the analogy that deputies are spare tyres, but the unanswered question is that if it is so, why do people still want the job if it is such a useless job.

Previous: 2023: APC has nothing to show for Nigerians, says PDP
Next: 2023 Presidency: APC says it won’t sanction Nigige, others for holding different opinions