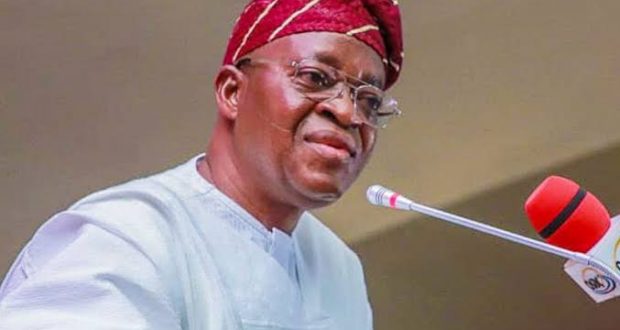 An expert in Political Sociology and Conflict Management, Dr John Kolawole, has painted a hrim picture of the administration of of Gboyega Oyetola of Osun.

The stakeholder described his Government as the weakest in the history of the state.

Acccording to him, various projects being embarked upon in the last two years have exposed Governor Oyetola mediocrity.

He said  thi in a statement tagged: ‘Osun in disarray; an urgent call for action’ the copy which was made available to newsmen in Osogbo, the state capital on Monday.

Kolawole lamented that nonchalant disposition in the cabinet of Governor Oyetola have reversed many achievements previously recorded by past administrations in the state.

He said, “This Oyetola is obviously bereft of ideas about governance and impeccable administrative strategy, to make matter worst, he further displayed naivety by surrounding himself with people with lesser cognitive strength and professional savvy.

“This Governor’s pattern of appointment is directly proportional to his intelligence quotient. How could a man of that social status surrounded himself with mediocre out of illogical sentiment, thereby putting the state into serious jeorpardy.

“You are approving an appointment of a wife as a Personal Assistant to her husband who is an Attorney General of the state. This is indeed very strange and unbelievable.

“The security of the state is in unprecedentedly sorry state, as the state is presently in Hobessian state of nature, where life is short, poor and nasty.

“Unlike previous administrations, Oyetola appointed his like as Special Adviser on Security, who remains inertia when cultists and kidnappers have taken over the state, killing and maiming at will.

“Look at how Governor Seyi Makinde deceived the Governor and the two elements he appointed as SA and Commissioner in charge of education, to get the sole ownership of LAUTECH and reneged the so-called agreements they ignorantly signed.

“Critical stakeholders in the Osun project must quickly come to the rescue of the state and salvage the state from bigger crisis”.

“I read the watery narrative put forward by the Commissioner for Information, one Funke Egbemode, titled: ‘Should We Spill More Blood’ to justify the necessity for the construction of the bridge and wept for the state, we have never had it so bad like this. I couldn’t fathom the state of mind of the Governor at the point he was considering the appointment of Mrs Egbemode.

“The other day, Mr Oyetola was attacked by hoodlums during Endsars protest, the next thing I would see was his Spokesman, Ismail Omipidan, speakng Hausa to explain what happened on that day; it was bizarre at it appeared senseless.

“Those are the characters this Governor is parading in Osun. Oyetola seriously needs help”, he said .

Previous: Alleged printing of N60bn: Obaseki was in APC, he understands their gambit- Wike
Next: ‘Gandollar’ Video: Daily Nigerian Publisher goes into hiding over alleged threats from Ganduje