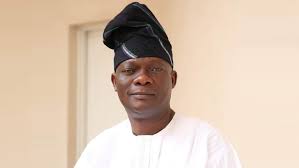 The People Democratic Party in Oyo State has called on the authority of the Nigerian Police Force to closely monitor the activities of Senator Teslim Kolawole Folarin.

According to PDP, the monitor I is necessary so as to curb violence during the upcoming governorship election in the state.

The opposition alleged that the APC candidate had been recruiting thugs to cause crisis in the state ahead of the forthcoming general elections.

PDP in a statement signed by its Publicity Secretary, Akeem Olatunji called on the police authority to call Folarim to order before he turns the Oyo state to field of violence.

“We want to use this medium to call on the Oyo state Commissioner of Police, CP Adebowale Williams, and the IGP, Alhaji Alkali Baba Usman to immediately bim security searchlights on Folarin in order to prevent his desperation from raring its ugly head as it allegedly did with the late Eleweomo.

“We have on good authority how Folarin and his cohorts are recruiting and raring political thugs and hoodlums, especially in Ibadan, the state capital all in his desperation to become governor and we’re not oblivious of the fact that he may start springing up surprises in form of attacks on popular individuals not on the same political page with him just as he is notable for and then raise false alarm as a diversionary measure to sway suspicion against him.

“It is even more worrisome that Folarin’s desperation has blindfolded him so much that he is yet to mention to the good people of Oyo state what he and his party have to offer the state after leaving the people with sheer terror, unpaid salaries, pension and gratuities for many months leading to untimely deaths and paralysis of many, humongous debt burden, and other unforgettable atrocities under APC between 2011 and 2019,” Olatunji said.