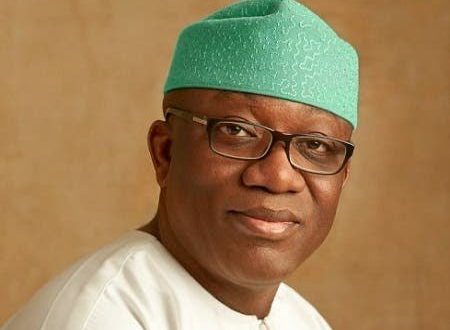 The Peoples Democratic Party (PDP) in Ekiti State has challenged Governor, Dr Kayode Fayemi, to give account of the over N3 billion received by his government to ease the economic hardship caused by the Coronavirus (COVID-19) pandemic.

The party also accused the Commissioner of Police in the State, Mobayo Babatunde, of protecting state government’s thugs, who killed one Prince Sunday Ogunleye at Oke Ureje in Ado Ekiti last Tuesday, and invaded GNN Guest House, also in Ado Ekiti on Saturday night where they fired gunshots at everything in sight and abducted a former member of the State House of Assembly, Hon. Dayo Akinleye, Ariyo Afolabi and three others.

In a statement issued on Wednesday, by the State Publicity Secretary, Raphael Adeyanju, the PDP said it was funny that the police in Ekiti State under CP Mobayo Babatunde, lied against those who were attacked by the thugs and charged them to court for arson while allowing the gun-wielding thugs to move about freely.

The party, which said it will continue to prevail on its supporters to maintain peace, added that “if the police do not arrest and prosecute the thugs, despite being in possession of credible evidence, including CCTV footages of their criminal acts at the GNN Guest House on Saturday, it will get to a point that we won’t be able to stop our supporters from defending themselves if the police cannot protect them.”

On the over N3 billion COVID-19 fund, the PDP said, “the people of Ekiti State deserve to know what happened to the fund since there is no evidence to show that it was spent on anything.

“Governor Yahaya Bello of Kogi State openly admitted that his State received N1 billion as COVID-19 fund from the Federal Government and that N1.1 billion grant was provided by the World Bank.

“Governor Bello went on to say that it was only Kogi State that refused to sign MoU accepting the World Bank document N1.1 bilion grant, meaning that other States, including Ekiti got the N1.1 billion from World Bank.

“Also, over N1 billion was donated to Ekiti State by private individuals and corporate organisations, making over N3 billion that the State got for COVID-19.

“Our question is, where is the money?”

The PDP, which also demanded the whereabouts of the palliatives supplied by private sector-led Coalition Against COVID-19 (CACOVID), said that since the food items were distributed by CACOVID early this month, Ekiti State government cannot claim to have distributed them.

The party said: “We have read statement by a group of All Progressives Congress (APC) in Ekiti State, claiming that the palliatives donated to CACOVID are being kept in Jibowu Hall as well as three other locations in the Government House and the government has not refuted this.”