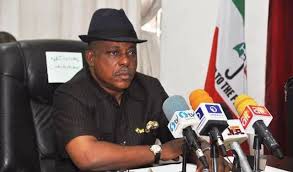 The crisis rocking the Peoples Democratic Party (PDP) split into two factions as reached another stage as two factions are laying claim to the seat of Uche Secondus.

A court in Port Harcourt on Monday issued an order restraining Secondus from parading himself as PDP National Chairman, and also, from taking part in any activity of the party while the order lasts.