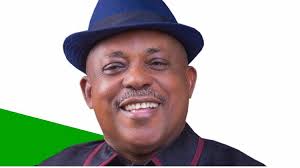 The key stakeholders of the Peoples Democratic Party (PDP) in the House of Representatives has begun the move to force its Chairman, Uche Secondus out.

They called on the PDP Board of Trustees and the Governors’ Forum to commence the refocusing of the party.

They lawmakers called on the PDP chairman to resign now.

The resolution follows an online meeting by the lawmakers held on Saturday.

In a statement signed by the leader of the PDP caucus, Kingsley Chinda and his deputy, Chukwuma Onyema, accused the Chairman of being concerned about staying in the office than preparing for the next election.

“The National Chairman seems much more contented with occupying the office and therefore preoccupied with holding onto his position rather than preparing for next elections,” the lawmakers said.

They added that “further three months under the ruler-ship of the Chairman will do grave injustice to the party and put us in a precarious situation as every hour should matter now.”

It would be recalled that Rep Rimamnde Shawulu recently called for the resignation of Mr Secondus.