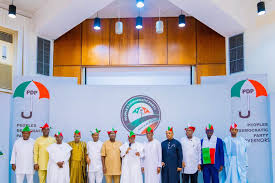 Peoples Democratic Governors  have urged the President Muhammadu Buhari’s led government to partner the state governments to tackle the unemployment crisis in Nigeria.

The advice was given on Monday in a communiqué read by the Deputy Governor of Zamfara State, Mahdi Mohd at the end of their meeting in Bauchi State.

The Governor’s who were fourteen in number lamented that foreign investment into the country has drastically reduced in the following alleged activities of regulatory authorities.

According to the governors, “On the economy, the meeting admonished the APC Federal Government to collaborate more with State Governments to stem the unemployment scourge affecting the youths of Nigeria, through technology and increased production in all fields of endeavour, reiterating that Government should stop paying lip service on the Ease of Doing Business, as foreign direct investments have continued to fall partly due to obstacles placed on foreign companies wishing to invest in Nigeria.

The Governors also lampooned the Federal Government for allegedly frustrating Facebook from investing in Nigeria.