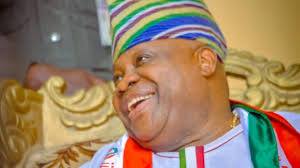 The People Democratic Party PDP, has given kudos to judiciary over its refusal to grant an order seeking to stop the governorship inauguration of Senator Ademola Adeleke slated for Sunday.

The commendation was released by the Osun State Caretaker Chairman of the Peoples Democratic Party, Akindele Adekunle,

In the statement, he said some people had approached a Federal High Court sitting in Osogbo last Friday, asking for an order to stop Adeleke’s inauguration.

According to him, the Judge deserves kudos for handling the matter for refusing to grant such an order.

Adekunle said, “Some paid agents of destabilisation had approached the Federal High Court, Osogbo, on Friday, seeking an order to stop the swearing-in programme slated for Sunday.

“His lordship, Justice Emmanuel, in his wisdom declined granting the order, adjourning the case to Thursday to explain why the swearing-in must stop.

It beats imagination for any sound mind to even contemplate halting a democratic constitutional process. The greed for power is driving some defeated politicians into electoral insanity.

“It is perplexing and truly reprehensible to imagine a repeat of a day when officers of law will apply to destroy the product of a legitimate electoral process. It is not just sad for democracy but equally a task for the legal practitioners disciplinary council to take up.

“We call on the legal disciplinary committee to summon the affected lawyers for disciplinary encounter. There must be a red line. To surrender oneself as a tool to destabilise democracy should warrant disciplinary action from the bar.”

Previous: You will be sacked if you accept posts- Adeleke threatens new perm secs appointees
Next: Stop spreading fake news about me- Makinde warns APC