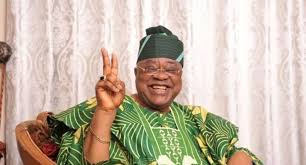 The People Democratic Party has declared that a former Governor of the state, Chief Christopher Adebayo Alao-Akala, died at a time his wealth of experience was most needed.

Chairman of the party in Oyo State Mr Dayo Ogungbenro made this disclosure on Thursday.

It will be recalled that  that Alao-Akala, who ruled the state as Governor between 2007 and 2011, died on Wednesday.

Reacting,  PDP said that he  died at a time when his wealth of experience was most needed.

PDP Chairman, Dayo Ogungbenro in a statement made available to DAILY POST on Thursday through the Publicity Secretary of the party, Engineer Akeem Olatunji, said that the deceased was very passionate about the state.

The party said it received the news of Alao-Akala’s death with rude shock.

PDP added that the former Governor was loved by his people.

“Death, of course, is an incontrovertible debt all mortals must pay but the exit of loved ones leaves pain and sore taste to swallow especially when they depart at a time their wealth of experience in public service and service to humanity are still needed.

“While we still brood over these losses Oyo state was hit again by the sudden death of the former governor, Otunba Bayo Alao Akala, who held sway as the number one citizen of the state for four years on the platform of PDP,” he said.

“Akala was always full of life and beaming with smiles even at such advanced age of 71 years old but we submit to and take solace in the will of God Almighty because we know that from dust all mortals were made and to dust all must return.

“It is our earnest prayer as a political party and as a people that God grant the entire Akala family the fortitude to bear the pain of his passing and the deceased the eternal rest.”