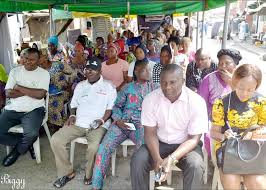 Politicians have abandoned us, they only remember us during electioneering campaign- Lagos community

Residents of Ajegunle, Ajeromi-Ifelodun Local Government Area of Lagos State have expressed dissatisfaction with the quality of representation they are getting their representatives at various levels of government.

The residents who spoke at a stakeholders’ forum organised by Transforming Ajegunle Projects (TAP), a non-governmental organization (NGO), were particularly angry that their local government chairman and lawmakers at the state and federal level have not provided empowerment programmes for the poor and the needy in the community.

The Nation reports that some persons living with disabilities and widows who spoke with our reporter said it is only during periods of electioneering campaign when they are soliciting for votes that they see the politicians representing them. One of such indigent residents added: “But, the moment they get to power they forget that we exist.”

To get shortlisted for empowerment programmes, he said, is a herculean task because the yardstick for selection is “man-know-man”, as it is said in local parlance.

But, Kolawole Taiwo, who represents Ajeromi-Ifelodun Federal Constituency at the House of Representatives, said the anger and frustration being expressed by the people of Ajegunle stemmed from the deteriorating the socio-economic situation in the country.

He cautioned them not to be angry with those that will bring a solution. He said one of the reasons he has not been doing empowerment programmes regularly is because some of the people he entrusted to carry out such tasks in the past were fraudulent by not making the items available to those they are meant for.

Lukmon Olumo, who represents the community at the Lagos State House of Assembly, said the people of Ajegunle are one, irrespective of their tribe and religion. He said the prevailing view that representatives of the community have not been reaching out to the people through empowerment programmes is not true.

Olumo said he has been carrying out empowerments at marketplaces and that most of the women present at the stakeholders’ forum are beneficiaries. The problem, he noted, is that “some people expect you to bring it to their homes”.

He urged residents to regularly visit his constituency offices or websites to register, “because that is the easiest way you can benefit from such programmes”. He added: “We have even gone outside our job description to create entrepreneurship programmes, so as to give back to the people. We put most of these opportunities out there, but some of the people don’t go after them and we should not be blamed.”

Previous: APC sets up committee on youth inclusiveness ahead of 2023
Next: LG Poll: APC has failed in many Local Governments in Ogun- Gov Abiodun confesses