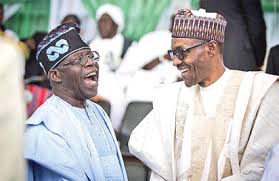 REVEALED: Buhari agreed to hand over to Tinubu in 2023, says Ex-CPC National Chairman

As the political activities on the next national elections continue to spring up, the  founding National Chairman of the Congress for Progressive Change, CPC, Rufai Hanga, has said that that there was an agreement that President Muhammadu Buhari would handover power to Bola Tinubu, National Leader of the All Progressives Congress, APC, in 2023.

Speaking during an interview with the Daily Trust, Hanga noted that the agreement of Buhari to handover to Tinubu was an “open secret.”

He added that the former Lagos State Governor would have dumped APC after Buhari’s first tenure but remained with the ruling party due to the “implied agreement.”

“This is an open secret. There was an implied agreement. Even in law, there is an implied and expressed act. If something is expressed, there are no two ways about it.

“There was an implied agreement that he would take over. That is why he didn’t back out after the first tenure.

“If Tinubu knew that he would not benefit, he would have backed out during Buhari’s first tenure. But he knows there was an agreement,”

Recall that Buhari was a member of the defunct CPC which merged with ACN and ANPP to form APC ahead of 2015 poll.

Previous: Buhari has failed woefully, I regret supporting him- Oyinlola
Next: 2023 general elections must be Internet-complaint