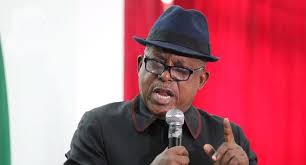 Secondus storms PDP secretariat, says he is back as Chairman

Uche Secondus, embattled National Chairman of the Peoples Democratic Party, PDP, has broken silence on his reinstatement by a Kebbi State High Court.

He said that the opposition party, PDP believes in the rule of law and obeys court orders.

Speaking to newsmen when he arrived at the PDP’s Secretariat ahead of the National Working Committee, NWC, meeting, he said he was back to continue his duties.

According to him, he was at the meeting to honour the court ruling that reinstated him.

He said, “It’s good to be back. We are a party that respects the rule of law. We obey Court orders, we obeyed the order given last week and we are obeying the one given yesterday. We have a series of meetings today.”

It will be recalled that a Riverrs State High Court had ordered Secondus to stop parading himself as the National Chairman of the party.

Justice Nusirat Umar of Kebbi High Court gave the order in Birnin Kebbi on Thursday while ruling in suit no: KB/AC/M. 170/2021.