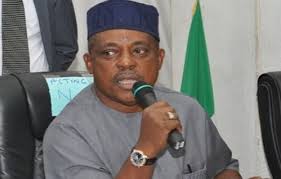 Secondus to Buhari: You have admitted your failure, resign now

Uche Seconds, the National Chairman of the Peoples Democratic Party, PDP, has come down hard on President Muhammadu Buhari.

Acccording to him, it has become very necessary for the President to tender his resignation honorably.

He asked Buhari to resign since he has admitted that his Government has failed woefully to protect Nigerians.

Buhari had openly expressed regret on Saturday over his failure to  perform one of his cardinal constitutional.

Buhari made the statement in Daura while speaking on the release of the abducted students of Government Science Secondary School, Kankara.

Secondus said: “Buhari should do the honourable thing and resign after he admitted failure of his administration on insecurity.

“And this ‘competent hand’ happened to be President Buhari whose five years in office has left the country comatose in all ramifications.

“I find it extremely unacceptable that after the President disregarded all wise counsel to rejig the nation’s security architecture for effectiveness, he is now turning round to admit their failure and blame operatives whom he kept even in their apparent inefficiency”.