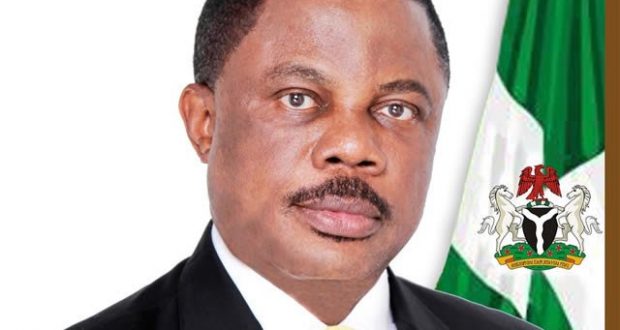 Governor Willie Obiano’s government in Anambra state has cast aspersion on Senator Ifeanyi Ubah for saying that the state recorded loss of N8billion by discounting the N25 billion promissory notes it received from the Federal Government.

Speaking on behalf of the state government, the commissioner for information ,C.Don Adinuba, said Ubah’s statement is far totally untrue.

He accused Sen Ubah of concocting figures to arrive at the so-called discount, challenging  Ubah to proceed to drag the state government to court as he he threatened.

It will be recalled that Senator Ubah, who is  made the allegation at a press conference.

The state government, through  Adinuba said: “The Anambra State Government is advising the senator to proceed to court immediately against it because no such amount or anything near it was lost in order to get discounts on the tranches of payment to the state government through promissory notes of the Federal Government of Nigeria”, Adinuba stated.

“It is awful to see a national legislator manufacture figures, driven solely by an ambition to become, by all means, the next Anambra State governor.

“Acts like this diminish the peddler, and proceeding to court with manufactured figures will bring such a person further to odium and public ridicule.

“If Senator Ubah fails to go to court with his fanciful figures and ideas, he has to resign from the Senate.

“The legislature, especially the Senate, is for thoughtful men and women who have prepared themselves for public service in the finest tradition.

“If he refuses to resign honourably, the people of the Anambra South senatorial zone know what to do”.

“Ifeanyi Ubah and his hirelings are the only traducers of Anambra State’s exceedingly impressive financial management”, Adinuba said.

“It is a conundrum that someone should be de-marketing the very state he wants to rule by all means.

“Whoever advised him to embark on this trajectory of manufactured facts just to be in the news did him a terrible disservice.”