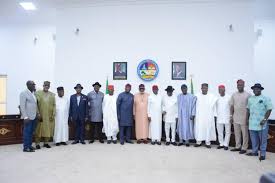 The Chairman, Senate Committee on Agriculture, Abdullahi Adamu (APC, Nasarawa) has blasted the Southern Governors Forum as regards their demand for restructuring.

Recall that the Governors met in Asaba on Tuesday and  demanded the immediate restructuring of Nigeria and the banning of open grazing in their areas.

Reacting on the development, Adamu, who was also a two-term governor of Nasarawa State, alleged that the southern governors betrayed their oath of office

Adamu said, “The recent meeting of the Southern Governors Forum is an act of betrayal of the trust Nigerians reposed in them. Each governor pledged and swore to an oath and they emphasised loyalty to the sovereignty of this country. They also pledged their loyalty to the President of the country. That’s their oath of office.

“While we accept the fact that we have freedom of association and freedom of expression as citizens, they have failed to express their views through the right channel. They are members of the National Council of State. Every governor is a member of the NCS. It also included former presidents who are still living.

“There is no better forum at their level to take a joint decision than such a forum. The fact that they have taken a decision as a divisive move does not speak well of their intention. I feel it is a betrayal of trust. I think they are just playing to the gallery.

“What they are saying is not new. Those things have become like broken records, saying the same thing over and over again. Why can’t they come to the appropriate body which is the National Assembly to project their ideas?

“They have members in the National Assembly who are representing them, if they have an issue that is so important as that which borders on the constitution of the country, they should go there and express their grievances.

“We would sit, debate it and see how best we can come out of it. There can’t be Nigeria if everyone wants to have things happen in his or her own way.

“There is a constitution and there is a framework that we are supposed to operate as governors. To go outside it is a betrayal of their oath of office. Each of them talking there, if you take a look at what is happening in their individual states, they cannot in all honesty and good conscience, challenge Buhari.”.

Previous: Ndume to Buhari: Use salaries of politicians to fight insecurity
Next: NPA: APC chieftain blasts PDP for attacking Amaechi