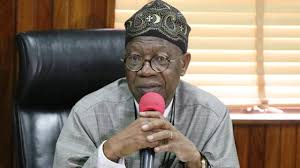 The Minister of Information and Culture, Lai Mohammed has accused some religious leaders of indirectly calling for the the ouster of President Muhammadu Buhari.

Speaking in a statement on Sunday, the Minister warmed clerics to refrain from making inflammatory statements to can cause hatred

Acccording to him, esorting to inciting statements could trigger dire consequences.

“While religious leaders have a responsibility to speak truth to power, such truth must not come wrapped in anger, hatred, disunity and religious disharmony”, he noted.

“Calling for a violent overthrow of a democratically-elected government, no matter how disguised such a call is, and casting a particular religion as violent is not what any religious leader should engage in, and certainly not in a season of peace”, he said.

He noted that calling for the removal of a democratically elected Government outside the ballot box is unconstitutional and Invitation to crisis.

“they should refrain from stigmatizing the leader they have never supported anyway, using well-worn and disproved allegations of nepotism or whatever”

Previous: Lopsided Appointments: Buhari has concluded Christians will do nothing- Rev Kukah
Next: I will rather be a ‘bus conductor’ than defecting to APC- Abia gov