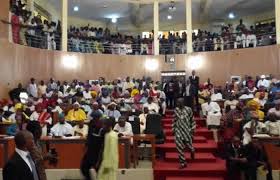 SSCE candidate must not be allowed to rule Anambra- Soludo

Governorship candidate of the All Progressives Grand Alliance, APGA, Prof. Chukwuma Soludo has insisted that a candidate with questionable NECO certificate should not be allowed to be the Governor of Anambra State.

Soludo was reacting to a challenge by the governorship candidate of the Young Progressives Party (YPP), Senator Ifeanyi Ubah.

It will be recalled that Ubah recently challenged him to a public debate.

In a press Statement by the former CBN governor which was signed on his behalf by his media aide, Mr Joe Anatune, Soludo said he was fully prepared for the governorship contest, including any debate and presentation of manifesto.

Soludo, however, said even though he was ready for any governorship debate, he would not be part of a compromised one organized and funded by Senator Ubah.

“Our attention has been drawn to a statement by Senator Ifeanyi Ubah of the YPP, challenging Prof Chukwuma Charles Soludo to provide his manifesto within 48 hours and a public debate within 7 days of presentation of his manifesto.

“For the avoidance of doubt, Prof Soludo is fully prepared and ready for any public debate in regard to the November 6 governorship election in Anambra State. However, as a man of honour, he will not succumb or be coerced into a hasty debate not organised by a credible organisation/institution and also not wholly supported by the people of Anambra State.

“In this regard, we consider this invitation as the usual charade of politicians seeking every available medium to court public attention. We therefore see the entire statement as self-serving and an act of unnecessary showmanship and brigandage which are not part of the culture of Prof Chukwuma Charles Soludo.

On whether Soludo made derogatory statements about School Certificate holders, Anatune said: “It is also pertinent, to state categorically, that Prof Soludo’s statement bordering on the issue of WAEC was not meant to disparage or denigrate anyone.

“He merely spoke on the need of Ndi Anambra to be vigilant by upholding the culture of excellence which the state is known for; and avoid those parading questionable school certificates in their desperate quest to become Governor of Anambra State.

“Our founding fathers who built the fastest growing economy in the world 60 years ago were also all best educated individuals. Sixty years after, we can’t go down to being governed by people with questionable NECO.