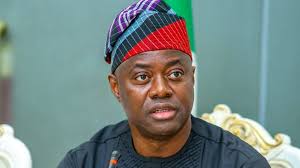 Oyo State Governor,  Seyi Makinde says he is happy at the conduct of the accreditation exercise of the Peoples Democratic Party (PDP) South West Zonal Congress which is going on  the Women and Children Development Initiative Foundation (WOCDIF), Osogbo, Osun State.

Makinde, during an interview with journalists journalists immediately after being accredited revealed that he had to present his Driver’s Licence before he was allowed into the venue of the congress.

Acccording to him, they had to put in place tight security to prevent ghost workers whose presence they were watching out for at the venue of the congress.

Makinde added that despite the fact that the accreditation exercise started late, it was better, than for it to be rushed.

In his words, “Accreditation is starting two hours behind schedule but I feel it is better for it to be late and thorough than for it to be rushed through.”

The governor noted that the outcome of the congress has far reaching effects on the party at the national level.

“This is a zonal congress but it has ramifications for the party at the national level.

“If we get it right in the South West, then we know that the future will be bright for the Peoples Democratic Party at the national level.

“This is not just an election for zonal officials but we are here to put in our best and they will in turn represent us at the national level”, he added.