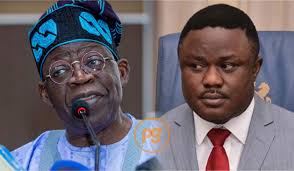 Tinubu has what it takes to transform Nigeria- Ayade

Speaking during APC campaign rally at Ogoja at the weekend, Ayade, who is also the APC senatorial candidate for Cross River North, said Tinubu has the capacity and was invited by Nigerians to do all he could to see to the growth of the country.

He said: “The APC presidential candidate can fix Nigeria because he comes with experience and he is an experiential architect with eyes-on and hands-on. Tinubu would make the infrastructural and economic development of Cross River a priority if elected.

Explaining that Tinubu’s presidency would be of immense benefit to Cross Riverians, Ayade said: “Let’s support Tinubu to become president so that the Bakassi Deep Seaport can be constructed.”

Previous: I am determined to end insecurity- Obi promises supporters
Next: Naja’atu Mohammed was sacked, she didn’t resign-Tinubu