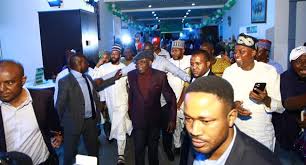 The former Governor of Lagos State, who is also the presidential candidate of the All Progressive Congress APC Asiwaju Bola Tinubu has returned to the country after spending some days in the United Kingdom.

In a tweet on Thursday evening, presidential spokesperson, Bashir Ahmad, had earlier announced the arrival of the political figure.

“After days of intensive political consultations and meetings in London, our presidential candidate, Asiwaju Bola Tinubu is expected back in Abuja, later today,”

It will be recalled that the spokesman of the APC Presidential Campaign Council (PCC), Festus Keyamo, had on Wednesday also said that the former Governor of Lagos would soon be back in the country.

It should be noted that the visit of the national leader of the ruling party  has been saying subject of discussion on social media.

Previous: Sowore attacks Tinubu and supporters over social media pictures
Next: Those wishing evil for Tinubu will be put to shame