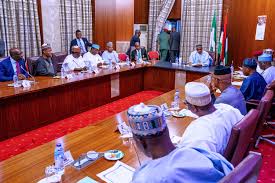 President Buharii has held a meeting with governors elected on the platform of the All Progressives Congress (APC).

It was learnt that the  agenda was to discuss the choice of a running mate for Asiwaju Bola Tinubu, the party’s presidential candidate.

The meeting was held at the Presidential Villa in Abuja.

Kebbi governor and chairman of the Progressive Governors Forum (PGF), Atiku Bagudu, led his colleagues into the meeting with Buhari.

Chief of staff to the president, Ibrahim Gambari; Governor of Kaduna, Nasir el-Rufai; and governor of Borno, Babagana Zulum were among those present at the meeting.

Last week, the Bola Tinubu campaign organisation admitted that APC governors are at liberty to pick a running mate for Tinubu.

Bayo Onanuga, the spokesman of the campaign organisation, said Tinubu’s running mate can come from any geo-political zone and religion.

“The party leaders will look at the chances and decide how they will balance a Muslim from the south, maybe with somebody that comes from north-east, north-central or from the north-west.

“That is how it is done. I cannot circumvent the party,” he said.

Previous: Those who defected to PDP in Kogi ate ghosts, not our members- APC
Next: 2023 Presidency: Ohanaeze warns Peter Obi against becoming Kwankwaso’s running mate