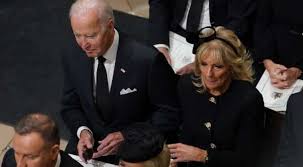 Donald Trump has mocked Joe Biden over his seating position at the late Queen’s state funeral.

Mr Biden was placed in the 14th row, only seven from the back, in Westminster Abbey’s south transept.

Mr Trump posted a photograph of the assembled world leaders, with a red arrow pointing to his successor, on his social media platform Truth Social.

According to UK Telegram, the former president maintained that, had he still been in office, he would have been seated further forward.

He argued it was a sign that the standing of the United States in the world had fallen since Mr Biden became president.

Mr Trump wrote: “This is what’s happened to America in just two short years. No respect!

“However, a good time for our President to get to know the leaders of certain Third World countries.”

He added: “If I were president, they wouldn’t have sat me back there – and our Country would be much different than it is right now!

“In Real Estate, like in Politics and in Life, LOCATION IS EVERYTHING!!!”

Due to protocol Commonwealth leaders were placed in front of those from other countries.

That meant Justin Trudeau, the Prime Minister of Canada, was nine rows in front of the US President.

Mr Biden and First Lady Jill Biden were seated next to Ignazio Cassis, the president of Switzerland.

Directly in front of the Bidens was Andrzej Duda, the Polish president, and immediately behind them was Petr Fiala, the Czech prime minister.

China’s representative, vice president Wang Qishan, was seated in the same row as the Bidens.

It was unclear which leaders Mr Trump meant when he referred to “Third World countries”.

Previous: Why Wike, Makinde and others should dump PDP immediately- Fani-Kayode
Next: Lagos 2023: Bode George reveals what happened before PDP primaries