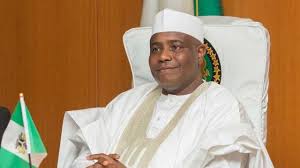 Peoples Democratic Party (PDP) Governors’ Forum Chairman, Sokoto State Governor Aminu Tambuwal has said that the party’s chieftains defecting to the to the ruling All Progressives Congress (APC) are the corrupt ones.

He also said the defectors left for APC to avoid likely prosecution for corruption.

The PDP governors, who converged on Bauchi to deliberate on the state of the nation, condemned what they described as “the use of underhand tactics to arm-twist PDP governors to join the APC.”

They reiterated their commitment to the electronic transmission of election results, urging the National Assembly to amend the Electoral Act to reflect the critical electoral reform.

The governors urged the Nigerian Communication Commission (NCC) and telecommunication service providers to improve access to network service for Nigerians ahead of the 2023 general elections. They said President Muhammadu Buhari should tackle insecurity and unemployment.

The meeting hosted by Bauchi State Governor Bala Mohammed was presided over by Tambuwal. The meeting also deliberated on the economic and security challenges confronting the country and the crisis rocking the opposition party.

Tambuwal, who was represented by his Taraba State counterpart, Darius Ishaku, spoke at the gala night held at the Bauchi Government House Banquet Hall, said the PDP will regain power in 2023.

He said: “We have no hope, except in PDP. We will live in the PDP, we will salvage whatever the country is left of when we regain power in 2023.

If you look around, it is only in the PDP states that projects are ongoing. I am speaking with facts and the minds of many Nigerians.”

“Those running and leaving the PDP to where their sins are forgiven… So, if you are a bad and corrupt man, you go over to APC to where your sins will be forgiven, but we do not agree and believe in intimidation. We will remain in the PDP, we will capture power and improve Nigeria “

Tambuwal who flayed the APC-led government for failing to conquer Boko Haram after promising to achieve the feat within six months in power added that the state of insecurity is getting worse.

“Those who said they were going to conquer Boko haram in 6-month, six years now they cannot do it. It is getting worse. We now have several Boko Harams terrorising the country. We will come and make Nigeria what it should be, the pride of Africa.”

In a communique read by Tambuwal, the governors stressed the need for the Electoral Act Amendment Bill to entrench the culture of free, fair and credible elections in the country.

Previous: Buhari-led APC govt has destroyed Nigeria’s democracy
Next: Ebonyi 2023: There will be no fighting about who will succeed me- Umahi